To make the world electricity generation greener, cheaper, and decentralized

MASWESTM uses 100 % ecologically friendly renewable energy sources. It supplies electric vehicles and rural households, electric tractors and remote farms, mining companies, and military facilities. The station, based on a 40ft container, is able to give a minimum of 124,000 kWh output per year. 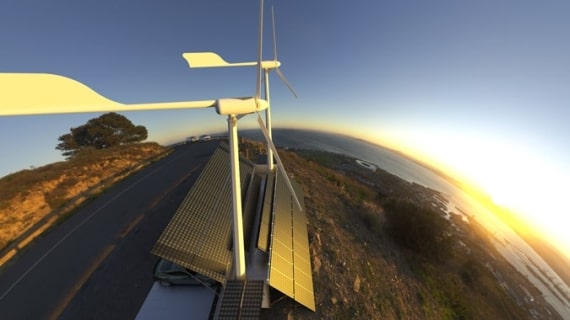 What are the MASWES consumers?

There is a possibility to simultaneously power at least 6 electric vehicles or other machines by 3 connectors: SAE CCS, Type 2, CHAdeMO.

How many EVs can be charged from MASWES?

The approximate number of EVs charged with 22 kWh battery capacity per day is at least 12-19 for South and Central Europe. 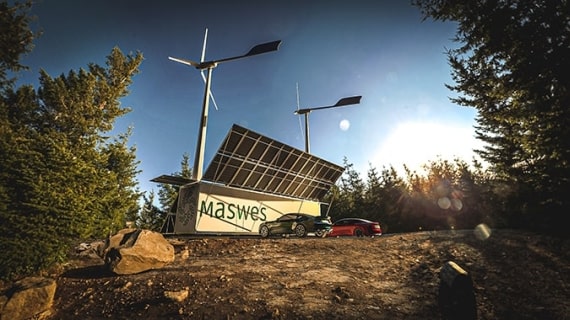 Are there competitors for MASWES around the world?

Right now there are about 5 competitive devices on different stages of manufacturing, but MASWES is the most economically efficient. 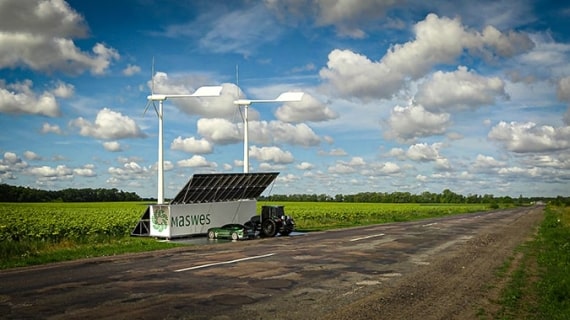 Is MASWES a transportable electrical station?

MASWES is exclusively limited by ISO container dimensions and can be easily moved by sea, road, railway, and air. 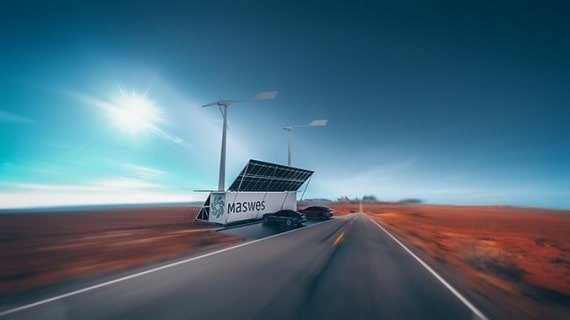 What are the dimensions of MASWES at the work phase?

Two powerful horizontal-axis wind turbines have at least 14 m height each. The square of photovoltaic modules is 120 m2. 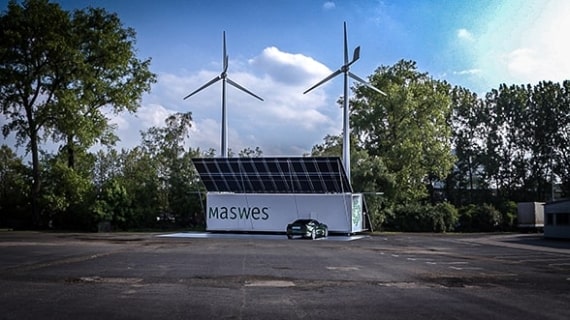 Is it difficult to install MASWES?

It is not. MASWES is carried by 1 container truck with a tilt bed or side-loader and is mounted by two crewmembers in one day. 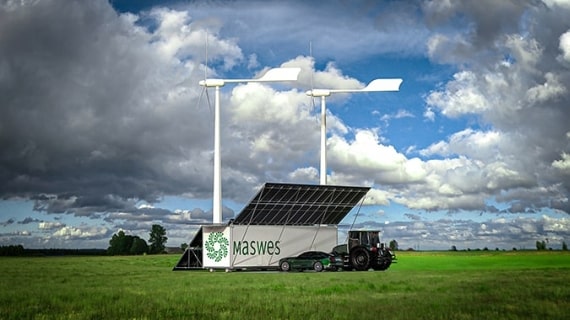 What is the nominal power of wind and solar parts?

The wind plant of MASWES provides at least 20 kW of power and the photovoltaic one minimum 30 kW. 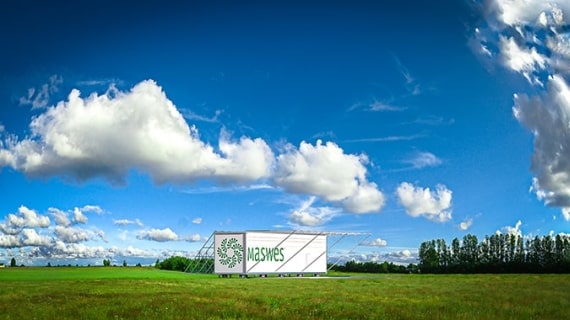 What are the dimensions of MASWES at the transport phase?

The dimensions are similar to a 40ft standard High Cube ISO container. 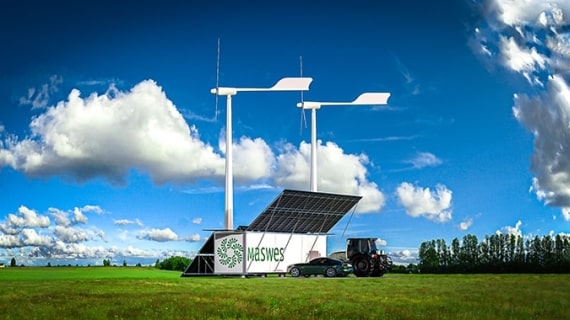 Yes, it is. It consists of powerful wind and solar plants, and has special systems of stabilizing and safety, autonomy and simplicity.

Mobile and transportable by air, water, and land

Its AI chooses the most advantageous locations

Off-grid or on-grid connection, if necessary

What Power Does MASWESTM Provide?

The approximate number of electric cars charged with 22 kWh batteries capacity per day is at least 12-19 for South and Middle Europe depending on the weather conditions that day.

One MASWESTM can provide all energy needed for 60 flats, when one flat has about 52 sq. m. (with central heating) with two people living, whose power consumed is 170 kWh monthly.

One MASWESTM generates all energy for 45 houses, when one house has around 150 sq. m. (with wood heating, gas cooking), with four people living, whose power consumed is 226 kWh per month.

What Does Renewable Station Consist of?

How Does Photovoltaic-Wind Plant Work?

The mobile stand-alone photovoltaic-wind power plant is based on one standard offshore container (ISO) with a reinforced grillage and a hull comprising three parts (levels):

The stability of the station's position is achieved by the propulsion of screw-piles into the soil (natural or previously prepared).

Two monolith towers or telescopic masts of the powerful on-shore wind power plant with blades and wind vanes folded or taken off, turned gondolas are oppositely mounted along with the container in the stowed position, which are lifted in series by the hydraulic mechanism and fixed by ropes to the ground and the housing of the container for expansion if it is needed.

After opening the shutters of the photovoltaic panels’ arrays, the installations are sequentially raised to the minimum necessary degree for the deployment of the blades, wind vanes bringing the gondolas and the blades into the work position.

MASWESTM includes simultaneously two turbines of at least 10 kW power and 14 m height towers each, but the nominal power of wind turbines can reach 25 kW each with 24 m height masts.

The MASWESTM’ photovoltaic modules arrays are folded and unfolded in a much more effective way, which allows us to have 120 m2 of two sided panels for a 40ft ISO container and to install and reinstall it by two crewmembers within a few hours. Certain surfaces of MASWESTM and next to the MASWESTM ground are covered by light reflecting materials that increase solar radiation for photovoltaic modules.

MASWESTM doesn’t have any protruding parts and is exclusively limited by ISO container dimensions at the transport phase. At the transport phase, multi-column photovoltaic panels’ arrays of MASWESTM folded above wind turbines under the proof container’s roof. The photovoltaic panels by themselves are housed in the electrical and another equipment part of an ISO container. If it is needed the container’s roof taken off covered by light reflecting material might be used as an addition to the light reflecting mats.

The accumulation and delivery of electricity are carried out by rechargeable batteries, which are also involved in the installation and dismantling of the station, with inverters.

To maintain a constant temperature in the station, a reversible (heat-cold) geothermal heat pump might be used, the refrigerant of which enters the channels go deep into the soil piles, or an air conditioner might be used instead of or additionally.

The necessary supply or disposal of working fluids and materials may be provided by drones through roof openings in the service area.

Why Should We Use Alternative Energy Sources?

Alternative Energy Sources do not interfere with health, environment, climate change and they are cost-effective.

According to the current blueprints an average output of MASWESTM is 7-10 EV’s with 41 kWh battery capacity (charging up to 80 %), Renault Zoe 40 as an example. MASWESTM daily output is 225-340 kWh.

MASWESTM in the agricultural industry

MASWESTM works in any place with sun or wind. The station is installed or reinstalled by two crewmembers in one day. 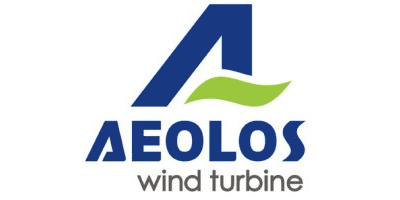 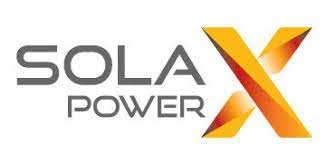 Founder, Inventor, Slovakia
Ph.D. in Economics (Integrated estimating and budgeting in construction). Master of Science (Finance and economy of construction and manufacturing). 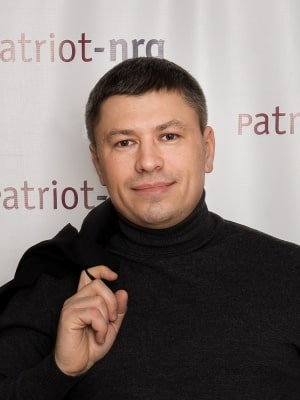 I have spent my career creating professional jobs and opportunities for others. When I was 21 I founded my first company. In the PATRIOT-NRG group (Bratislava, Kyiv) I led and as a general investor financed the project of making the complex software and method 700 pages product for energy-saving in Ukraine `PMKEU` in 2008-2010, there were about 150 units of them sold. I have been managing and creating as the main inventor of the new type of a mini `green` power plant - the MASWESTM since 2018. 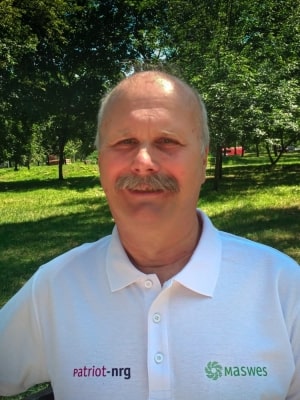 I have thirty years of research experience related to the development of systems for diagnosing the power equipment of nuclear and thermal power plants. I am the author of three dozen scientific papers and four inventions in this field. While working in the system of the Academy of Sciences of Ukraine, I mastered the methods of scientific research and skills of managing the development of diagnostic computer systems of high reliability and controllability, defended his dissertation, was accepted for doctoral studies. For a long time I was engaged in asset management of mutual funds working in an investment company. 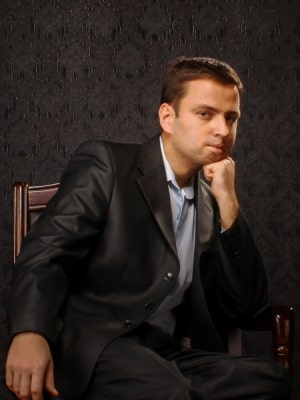 Over 20 years of experience in computer technology. My profession is scientific methods of resolving and calculating electrodynamical problems. I have a scientific degree of PhD in physical and mathematical sciences. It has trained me to use numerical methods and scientific engineering software. I consider my knowledge is more valuable by the combination of system administration of Linux-based operating systems, programming, SEO and practical leadership skills that allows me to work in mid-level and large companies. 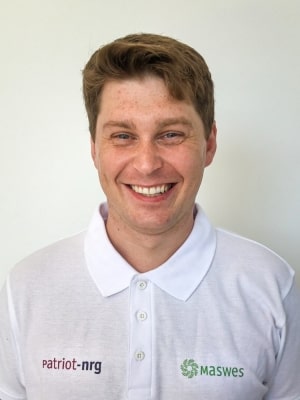 I am an inventor of the bottling liquids line too. Creating robotic solutions in accordance with the best practices in the fast developing robotic industry. My responsibilities were to develop a detailed project model, provide technical and design solutions to the tasks, full control and author's supervision over manufacturing of equipment. Writing G-codes to run on CNC machines. Development of non-standard equipment, modeling, and development of equipment, application units, and products’ mechanisms. I conduct modeling and analysis in SolidWorks and in Autodesk Inventor. I graduated from The National University of Water Management and Environmental Sciences. Master in Sciences. I defended my diploma project with honors. 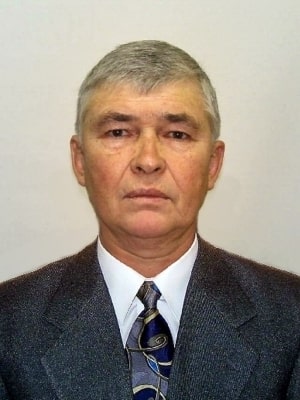 Specialty: electrical engineer. Development, production of work drawings, as well as, schematic and wiring diagrams of control cabinets for inductors of heating and technology, AtoCAD Electrical. Designing instrumentation and automation, adjusting the automation of industrial equipment. Adjuster of ultrasonic counters, programming the parameters of modems, correctors and heat counters. Maintenance of instrumentation and automation of the plant, programming of industrial controllers, weight controllers, dispensers and frequency converters, modernization of instruments and automation equipment. 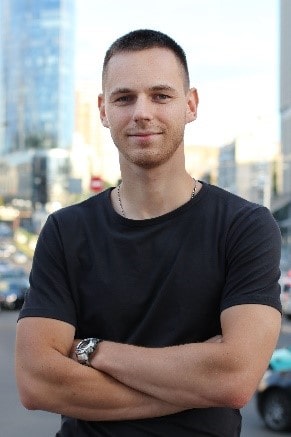 I am a structural engineer with more than 6 years of experience. I always look for the most complex and interesting projects as a way of developing myself as a professional. There are dozens of interesting projects in my portfolio, for example, silos, towers, large industrial plants, logistics centers, shopping centers, bus stations of national importance. However, the MASWES project is one of the most interesting in my career and I am proud that I am a part in it.